Ashley Johnson is one of the renowned American actresses whom you might have seen on your television screen a number of times. She is also known for portraying the character of FBI forensic specialist Patterson in the NBC drama Blindspot.

It's no doubt that Ashley has a huge fan following in her 3-decade long career. With the increase in popularity, Ashley's life on screen and behind the screen has been a matter of interest to most of the people out there.

And if you are one of them, this is where you'll get to know everything about her.

When there are many celebrities like Austin Abrams, King Bach, and Sydney Sweeney who has opted to keep the details of their love life miles away, the American actress Ashley Johnson has been flaunting her relationship via social media. Well, Ashley is not hesitant at all to give the glimpse of her love life to her fans and followers.

Ashely is currently relishing a blissful relationship with her boyfriend-turned-fiance, Brian Wayne Foster. She got engaged to the love of her life in December 2018. On 17 December, she took Instagram to share the happy news by posting a series of pictures with her man. 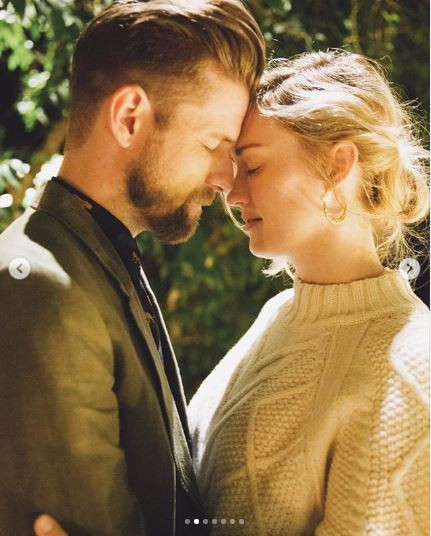 Ashley Johnson with her fiance, Brian Wayne Foster, on the day of their engagement. (Photo Credit: Instagram)

Whether it be a Valentines Day or any other occasion, Ashley has never missed a chance to show her love for her partner. The pictures from the romantic gateways, dinner dates, and various other events exhibit the chemistry that the pair share. Well, they began dating in 2012.

Currently, Ashley is over the moon in her relationship. Following the engagement, the 35 years of age actress might be planning to get married to her beau. Although the wedding vows are yet to make, the pair share a husband and wife relationship.

Ashley has a close-knit family. She was born on 9 August 1983 to parents Clifford Johnson and Nancy Spruiell Johnson. Her mother Nancy was an independent film producer whereas her father was the captain of an exploration ship.

The youngest of three children, Ashley was raised with her siblings- an elder brother named Chris and elder sister, Haylie. Her brother is also an actor who has in the TV series ‘The District.’

Just a day before Ashley's 17th birthday, her father died of Cancer.

Since Ashley's family has rich musical roots, she has an interest in music. She learned violin and piano at the International School of Music. She even knows to play guitar, cello, and ukulele. She is the granddaughter of Evelyn Taft aka Evelyn Johnson, a noted concert pianist.

Ashley Johnson's Net Worth From Her Movies

Apart from being an actress, Ashley is also a musical artist and voice actress. She has assembled the prominent part of her net worth from her acting career, which she began in 1990. With years of experience and several acting credits under her belt, Ashley has amassed the net worth of $3 million.

She started her acting career with the movie A.W.O.L.: Absent Without Leave in 1990, and as of 2019, she has over 100 acting credits to her name. She is known for her work in Growing Pains, Annie: A Royal Adventure!, Teen Titans, Ben 10 franchise, The Last of Us: Left Behind, Teenage Mutant Ninja Turtles, and many more.